I have had this rhyme in my files for many years:

I wasn’t planning on using the rhyme, UNTIL…

They are the cutest knitted finger puppets!  I bought them from a local store, and they had so many I could barely choose which ones to buy. I settled on these, with more to come, I’m sure.

Anyway, while trying to figure out how to use these puppets in storytime, I remembered this rhyme. I thought that instead of using a (name) in the rhyme, I could use a puppet.  I wanted to use the pink glove to fit into my Valentine’s theme. The hearts (the Valentines from the rhyme) are attached to the glove with velcro dots, and I was ecstatic to see that the hearts (or rather the velcro dot on the back) stuck to the knit finger puppets!!! 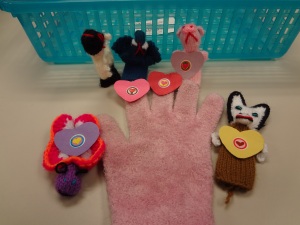 So, it took a minimum of finagling, but here’s how it worked. I put on the glove with the hearts attached, and had the finger puppets on the table next to me.  I said the rhyme, had the kids show me the numbers with their fingers, and when I got to the (name) part of the rhyme, instead of a name I said the name of the animal, who then took a Valentine off the glove.  Fun! 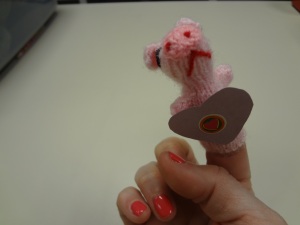 6 thoughts on “(not a) flannel friday: 5 Little Valentines”